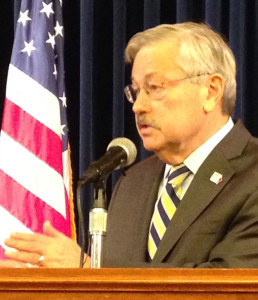 Governor Terry Branstad is not confirming he told a lawyer in “The Family Leader” organization to “call off your attack dogs” who’ve been criticizing Branstad for not fully “defunding” Planned Parenthood in Iowa.

The Family Leader sent out an email last Friday to report on the conversation. The email said Branstad asked the group to stop criticizing him for not taking executive action to cancel Medicaid contracts that reimburse Planned Parenthood for cancer screenings and tests for Medicaid patients. Branstad says the courts have ruled against states that have tried to do that, including the ruling this weekend striking down Governor Bobby Jindal’s attempt to “defund” Planned Parenthood in Louisiana.

“Listen, I’m pro-life and I want to do what we realistically can do, but I also feel an obligation to act within the law,” Branstad says.

As for what Branstad may have said to Chuck Hurley, who is The Family Leader’s chief counsel, the governor’s not talking. And he’s not revealing which Des Moines-area restaurant the conversation took place either.

“There are some things that are private, even in my life,” Branstad told reporters this morning (audio of news conference here.

The Family Leader’s Friday afternoon email message encouraged supporters to call and email Branstad, to “keep up the pressure” until he “defunds” Planned Parenthood in Iowa. The email was signed by Bob Vander Plaats, Branstad’s 2010 Republican Primary opponent.  Read the email here.