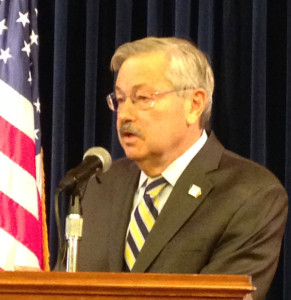 “They have supported it and passed the bill twice that would do something similar to that,” Branstad said this morning during his weekly news conference.

Branstad’s Department of Revenue has drafted a rule that would no longer tax “consumable supplies” used in the manufacturing process, things like drill bits and hydraulic fluid. That new tax policy is scheduled to go into effect July 1. It’s a big tax break Democrats say should be passed by legislators.

“This is no change in the law,” Branstad said. “This is merely a clarification to modernize the definition under what modern manufacturing is all about.”

Branstad told reporters he’s “very careful” when taking this kind of executive action. Critics point out the courts have ruled Branstad exceeded his executive authority in closing Iowa Workforce Development offices. Another lawsuit challenging Branstad’s unilateral decision to close the Iowa Juvenile Home was dismissed. The Iowa Supreme Court said the issue was “moot” since the home had been closed for over a year and legislators did not appropriate money to reopen it.