You are here: Home / Education / Documentary examines consolidation of schools 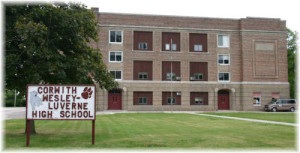 A documentary about school consolidation in Iowa will premiere this week on Iowa Public Television.

The one-hour program was produced by the Des Moines Register, which compiled a yearlong series on the issue.

Register journalist Jason Clayworth says the story is essentially about rural decay. “This is really a story about some seismic demographic changes in Iowa and the consequences they’ve had on, specifically, rural communities in the state,” Clayworth said.

The documentary, titled “Lost Schools,” follows a pair of communities over a one year period. That includes the town of Corwith, as its residents voted to close the Corwith Wesley LuVerne School District.

“The other community we focused on was the town of Gowrie, where the Prairie Valley School District and the Southeast Webster Grand School District, for the first time, whole-grade shared their middle and high schools,” Clayworth said.

The two stories highlight the sadness of the loss of a school and the struggles people face when consolidating schools. “So, really, it was emotional for both communities because we’re talking about great change,” Clayworth said. “A school is something in a community that is very personal for the residents because parents and grandparents, in many cases, have all attended these schools.”

Lost Schools will premiere on Iowa Public Television this Thursday (October 22) at 7 p.m. The program will also air on Sunday (October 25) at 1 p.m.