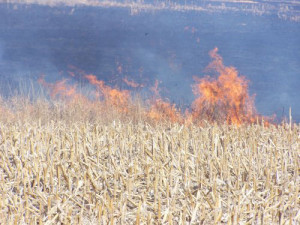 Fire in a cornfield.

A Red Flag Warning is posted statewide for all but a few counties in northwest Iowa. The National Weather Service says the risk of wildfires is high today , due to strong winds, low humidity and dry vegetation. Farmers need to be especially cautious as they harvest dry crops.

Iowa State University Extension ag engineer Kris Kohl conducted a survey on the most common causes of combine fires. “Wind is the number-one factor, especially when you’re above 25 miles-an-hour, to having fires,” Kohl says. “If we are harvesting, be very careful about bearings and stuff sitting on it because if we get a fire going, it’ll really take off.”

He says farmers might be wise to give their equipment frequent breaks to cool off and for clean up. “Stop every two or three hours and take a leaf blower and blow all of the chaff off of things,” Kohl says. “Check bearings to make sure nothing is getting hot. Bearings and exhaust are the two things that are prevalent when we have fires from combines.”

Two years ago, there were two major combine fires in northwest Iowa, which prompted the survey. Last week’s windy conditions contributed to several large fires in North and South Dakota. Forecasters say there’s a chance for some showers in Iowa tomorrow though some areas of the state haven’t had significant moisture in several weeks.