You are here: Home / Fires/Accidents/Disasters / Winds turn one fire into two near Le Mars 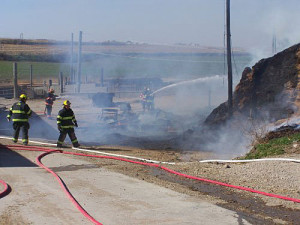 Firefighters work on a fire near Le Mars.

A storage shed fire on a farm near Le Mars Sunday soon turned into two fires thanks to heavy winds. The Le Mars Fire Department responded to a fire around 12:30 p.m. and fire chief Dave Schipper says the strong winds carried away burning embers from the shed fire.

He says the embers from fire were carried around one thousand feet or four city city blocks, to the north to a corn field. “And then we had a corn field fire basically four blocks away from the fire in the farm yard,” Schipper says. He says fighting the two fires at once made it a tough afternoon, but they received a lot of help from area fire departments and farmers. “We didn’t lose any buildings other than the two that were on fire when we pulled into the farm yard and we didn’t lose any fire equipment or tractors or discs, and nobody got hurt. So, those are the most important things,” Schipper says.

Two sheds and the various tools and equipment stored in those buildings were lost, along with an unknown amount of silage, and at least 50 acres of corn. Schipper says the cause of the fire was accidental.