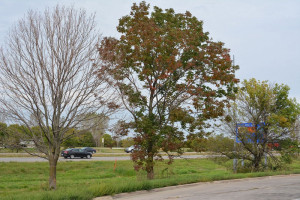 The state had confirmed an infestation of the emerald ash borer (EAB) at a rest area along I-380 approximately one-half mile north of the Johnson County line.

The Department of Transportation’s chief landscape architect Mark Mastellar says this is the first time the tree-killing pest has been found at a state rest area.

They are rest areas on both sides of the interstate, and he is not sure exactly how many ash trees are there. “We were planning a project even before this find to go in and clean out the ash trees at both of these rest areas even before this find,” Mastellar says. “It’s at that time, probably next spring sometime, that we would go out and do an inventory and figure out exactly how many we are talking about.” 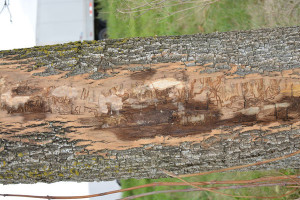 Damage done to an ash tree from the emerald ash borer.

Mastellar says the state used ash trees quite a bit at the facilities. “Probably every rest area in the state has ash trees in it,” Mastellar says. “We just start here this last year — maybe two years — kind of going back to clean out some of the ash trees in advance of the borer moving in. But also, just to try and spruce up the landscaping a little bit. Some of those haven’t had much attention.”

They won’t know the total number of ash trees on those state pieces of property until they complete their work at each one.

“I’ve think we’ve done five or six rest stops so far out of the 38 in Iowa, and we are probably going to do a similar number next year. Probably keep at that until we get all those cleaned up,” Mastellar says. He says they don’t know yet how much it might cost the state to clear out the ash trees from the rest areas — as the cost depends on several factors.

“Depending on the quantity of trees that are being removed, depending on where they are. Can you just drop them, can you bring them done in pieces, do you have to climb them, there’s a lot variables in those costs. Just a typical tree out on the right-of-way not having to worry about pedestrians or the sidewalks — a hundred bucks is about what one would cost,” according to Mastellar. 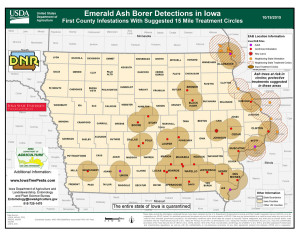 But the costs goes up with the difficulty of taking out the tree. “When you get into a rest area and you have buildings around and utilities and those other things, then the price starts going up. It might be five, six, 700 dollars. Might be even higher,” Mastellar says.  He says they have so far used money from the landscaping budget to cut out and clean up ash trees.

Mastellar says the DOT would contract with someone to take out the ash trees, but likely wouldn’t try treating the tree.

“It’s pretty rare that we would want to spend the kind of money it takes to salvage those trees,” Mastellar says. He says if a tree was in great health and providing a useful purpose they might consider saving an ash tree. But he says with the cost of a replacement tree versus what it would cost to treat a tree, it is better to cut the ash trees down and replace them.

The coordinator of the DNR’s EAB team discovered the infestation while at the rest stop on the way to check out another potential infestation. The emerald ash borer has now been confirmed in 29 of Iowa’s 99 counties.