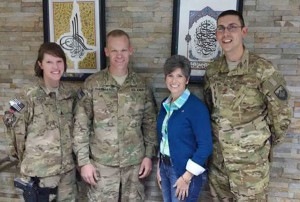 Senator Joni Ernst visited soldiers on her trip to the Middle East.

Iowa Senator Joni Ernst, says a recent trip to the Middle East with a Congressional delegation was an “eye opening” experience.

“It was quite evident, even on my short trip to the region, that the situation on the ground poses a greater threat to our homeland, U.S. interests and out allies, than the Obama Administration has led the American people to believe,” Ernst says.

Ernst met with leaders from Israel, Iraq and Afghanistan. “Our efforts are valued, however we heard time and again that they wished we could do more to eradicate ISIS,” Ernst says. “ISIS has made it into Afghanistan and they continue to spread and grow. We are very much losing our voice and leadership in the region.” Ernst says many of the leaders she met with say they have yet to hear from the administration on the U.S. strategy.

She met with U.S. soldiers and says are worried about the number of troops and whether they will be enough for the mission. They learned about the president’s plans to keep troops in Afghanistan longer, while she was visiting. She says keeping the troop level at 9,800 is “a very good step in the right direction.” But Ernst stresses again the need for a strategy to “defeat these extreme terrorists.”

Ernst, who is a veteran, says she has confidence the U.S. troops will do a good job. “They will continue working with the Afghan Army, their security forces, making sure that the people in Afghanistan are safe and secure,” Ernst says. Ernst says Republicans and Democrats must work together to get the budget situation settled so the troops have the support they need to continue the fight.