You are here: Home / News / Iowa supporters react to Biden’s decision not to run in 2016 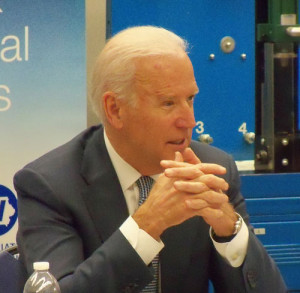 Vice President Joe Biden during an appearance earlier this year at DMACC.

Vice President Joe Biden has decided not to run for president. Biden began seriously considering a White House bid after his son, Beau, urged his father to run just before he died of cancer this spring.

“I’ve said all along that process, by the time we get through it, closes the window on mounting a realistic campaign for president, that it might close,” Biden said. “I’ve concluded it has closed.”

Biden made the announcement today in the Rose Garden, with his wife and President Obama standing beside him. Biden did not endorse any of the Democratic candidates who are running for president. The vice president said, though, he would urge voters to continue on the path President Obama has charted for the country.

“We can do this and when we do, America won’t just own the future,” Biden said. “We will own the finish line.”

Dubuque County Auditor Denise Dolan is a long-time Biden backer who has been part of the “Draft Biden” effort.

“I believed that Vice President Biden would be the best candidate for the Democrats to nominate, but I’ve also known him for a long time and I consider him a friend and want what’s best for him,” said Dolan, who has met personally with Martin O’Malley twice and is leaning toward backing O’Malley in the Iowa Caucuses.

Polk County Treasurer Mary Maloney has known Biden and his family for decades.

“I’m sad,” Maloney said, “but I completely understand because when you get to know Joe Biden, you understand how family is so, so important to him and I think he’s still grieving.”

State Representative Lisa Heddens, a Democrat from Ames, backed Biden in 2008 and had signed on to the “Draft Biden” campaign.

“I’m certainly a little sad that he’s opted not to seek the nomination,” Heddens said.

Heddens spoke with Biden a couple of weeks ago, but she describes the conversation as personal, not political.

“He’s gone through some very sad and traumatic circumstances with the loss of his son and I personally can’t imagine going through that and I’m assuming that’s played a part in his decision,” Heddens said.

Biden has maintained a long-distance friendship with Heddens’ son, Paul, who has an intellectual disability and Paul was the focus of the vice president’s recent call to Heddens. Heddens now plans to consider all the Democratic candidates in the race before making a decision on which one to support.