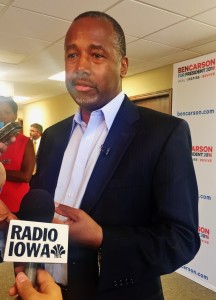 Ben Carson speaks to reporters at his campaign office in Urbandale. (file photo)

For the first time, Ben Carson is leading Donald Trump in the GOP presidential race in Iowa. Peter Brown is assistant director of the Quinnipiac University Poll which surveyed likely Republican caucus goers.

“Doctor Carson is doing very well. He now gets (the support of) 28 percent of likely caucus goers. Donald Trump, who had been ahead by six points when Quinnipiac last polled caucus goers a couple of months ago, is now in second place with 20 percent,” Brown said. Among Republican women surveyed, Carson has the support of 33 percent while Trump is at 13 percent.

“When voters are asked if they have a favorable or unfavorable view of a candidate, Doctor Carson has a favorability rating of 89-percent,” Brown said. The latest poll shows Iowa Republicans give Trump a favorability rating of 53 percent. Only two other candidates register double-digit support in the poll. Florida Senator Marco Rubio has the backing of 13 percent and Texas Senator Ted Cruz is at 10 percent.

The poll was conducted between October 14-20 and involved 574 likely Iowa Republican Caucus participants. A Quinnipiac Poll of Iowa Democrats will be released Friday.