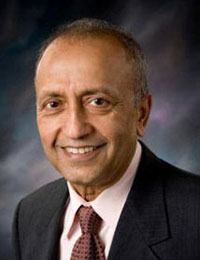 A member of the Board of Regents was critical of some of the process for the selection of the new president at the University of Iowa today, but he also assured the campus community that there was no predetermined action in the choice.

The announcement of Bruce Harreld as the new president has been hotly debated on campus and faculty and students protested during the board’s meeting on Wednesday.

Regent Subhash Sahai of Webster City, says the reports that some of the regents met with Harreld privately prior to the start of the interview process made him upset. “Needless to say, I was angry, mad and most importantly sad about this revelation,”Sahai says.

Sahai says while the meeting may’ve given the appearance that the selection of Harreld was predetermined, he does not believe that is the case.  “I want people at the university to know that we had impassioned, intense and rigorous debate about the choice of our candidate. I have always maintained that the decision of this magnitude requires unanimous support. To do otherwise would only stifle the function of the key people,” Sahai says. “Right or wrong, I stick by it and I think the majority of the people on the board at the time think that was the thing to do.”

He also says he got assurances that the meeting did not impact the decision on Harreld. Sahai says he met with board president Bruce Rastetter and president pro-tem Katie Mulholand and was assured that no prior decision was made prior to the interviews of the candidates. “There’s not reason for me not to take them at face value, I trust them,” Sahai says.

Shai says the regents share some of the blame for making the process seem like it might not have been impartial. “Just the private meeting that happened leaves the impression of favoritism and impartiality,” Sahai says. “It is also true that perception is worse than reality. And in this case I think that reality is much different than the perception that has been given to faculty, the staff and students of the university.”

Sahai says he understands why members of the campus community are upset. “These people — and I mean the people in the university — live breathe and love this place. And that is extremely understandable, and the demonstration yesterday was a testament to this. Let me also share with the folks of the university, that all the folks on the board, when I talk to them individually, they love this hallowed place also,” according to Sahai.

Regent Sahai had this message for the new president who takes over in November. “To Bruce Harreld I will say, however tainted this ball is, I hope for the sake of all of us — and that is the Board of Regents, faculty, students and staff — he runs with it and makes us shine and proud of his selection. As I said in the last meeting, the ban and the boon of history is that it is decided in the future,” Sahai says.

He did say Harreld has taken action to address the situation. “To the credit of president Harreld who is not here today, he has already taken some of the most important steps in healing the rift. And hopefully in the process also help this board from further criticism or even anguish,” Sahai says. Sahai also made a request of the campus community.

“Finally, I beseech the principals of the university to give Mr. Harreld a chance with the utmost sincerity …our future depends on it,” Sahai says. Regent Sahai’s comments came during a time in today’s meeting where the board president usually gives a report.