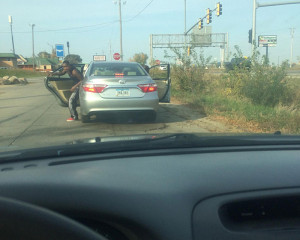 Police are looking for this person in a road rage case.

A manhunt is underway in Des Moines after a violent road rage incident on Thursday afternoon. Police say there was an argument between the drivers of two cars on the capitol city’s northeast side.

It’s not clear what sparked the dispute but the driver of one car drove away and the other followed. Police say multiple shots were fired from the pursuing car and the victim’s car crashed in a ditch and hit a fence.

The driver was not seriously hurt. That driver snapped a picture of the suspects.

The car police are seeking is a silver Toyota Camry with Iowa plates DMK905. It was reportedly driven by a white woman with two black men as passengers.