You are here: Home / Crime / Courts / New center at ISU will use statistics to help solve crimes

“We’re going to be looking at pattern evidence — for example fingerprints and shoe prints and ballistics and cyber evidence — and try to come up with statistical models that will help you quantify the error,” Carriquiry explains. “For example, if you conclude that a specific firearm fired a specific piece of ammunition, what’s the probability that your conclusion is not correct?”

Carriquiry says a good example of what they are trying to do is DNA evidence — which has become a standard that’s often used in cases because of the certainty it provides in identifying a suspect. “Everybody’s comfortable saying that the chance that somebody else may left that sample at the crime scene is pretty close to zero. Because we know that DNA is pretty unique,” Carriquiry says.

She says they hope to create that statistical certainty DNA provides for things found at crime scenes.”The question is, can we come up with the models that would allow us to may the same type of probabilistic statements for other types of evidence?,” according to Carriquiry. 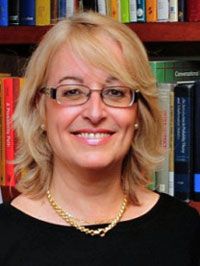 That’s where the distinguished professor’s background in statistics comes in. It would be used to show for instance, how likely it is a bullet came from a certain gun. “One could have a model that says if you see this type of marks and you if you see this many marks that are a match between two bullets, than you have a high probability that in fact the same firearm fired them,” Carriquiry explains. “On the other hand, if you don’t see this particular type of marks and you only see like two or three marks that match, then the probability decreases by X amount.”

Coming up with the statistical models to show that a gun or shoe is indeed part of a crime is only part of what the center will do. They also have to find a way to show people who may not know anything about statistics that all the number crunching is accurate. “One of the areas of research is in fact, how do you even transmit this type of probabilistic reasoning to lay people who may be in a jury,” Carriquiry says.

The center is being funded by a 5-year $20 million grant from the National Institute of Standards and Technology. It is the only federally-funded center of its kind in the country. Carriquiry says they are working with a lot of organizations to build a database of information. “Including the Army Defense Lab, the crime lab for the entire Army, and the Israeli police and various other groups that have a lot of data that they have collected in the course of their business. So that we can start analyzing and looking at real data,” Carriquiry says.

The center is already getting a lot of attention for the information it could provide in helping solve crimes. There are several crime and forensic type shows now on television, but she isn’t sure if the new center will one day be featured on a CSI-type show. “I don’t know if we’re going to show up on TV, but many of the federal agencies including the ATF and FBI and many of the other law enforcement groups are pretty attentive to what we are going to come up with. The hope is that we can help them with their forensic analysis — and mostly with the interpretation of their forensic analysis.”