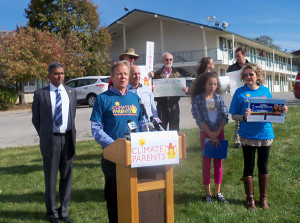 John Friedrich of Climate Parents talks about their goals.

A national organization which says it is made up of parents and grandparents who are pushing for clean energy is joining with Iowa groups to ask presidential candidates to back clean energy programs.

Climate Parents spokesman John Friedrich talked today near a billboard the group has purchased near the Des Moines International Airport.

“Responsible climate action means a rapid transition to clean renewable energy, which has a strong bipartisan support in Iowa. Our message to presidential candidates of both parties is — if you want the votes of Iowans and voters across the country who want a healthy future for our kids — you need to be a clean energy leader,” Friedrich says.

Des Moines middle school student, Ellie Filippone, also spoke. The 13-year-old says everyone thinks climate change is an issue for the next generation to deal with. “The problem with that is that it is our problem. It is our mess left to my generation to have to fix,” Filippone says. Filippone says the issue is part of a “butterfly effect.”

The group Climate Parents is pushing its message through this billboard near the Des Moines airport.

“The butterfly effect is when something happens — for example climate change — and the affect is like a ripple, because averting is connected. So the ripple effect would be that climate change would not only make the water and food shortages, plus extreme weather more dangerous,” Filippone says. “Do you think these problems are bad now? Well, they are only going to get worse from here.”

Doctor Yogesh Shah, Associate Dean of Global Health at Des Moines University says climate change is causing all sorts of illnesses to be worse than they normally would. Those involved in the renewable energy industry also spoke at the news conference. Former Iowa and NFL football player Tim Dwight is now President of the Iowa Solar Energy Trade Association. He says increasing the use of renewable energy sources like solar has a positive impact on the state’s economy.

“When you put a solar panel in, it is 75 percent local. so, this resource that we are pulling off our wind turbines, off our solar, off our geothermal, that’s all coming from within Iowa’s resources. That means all our money stays here,” Dwight says. He says the solar industry is gaining momentum in the state, already going from three companies to 40. Dwight says renewable energy’s expansion is not driven by the free market, it is driven by policies and needs help to overcome the historical dominance of fossil fuels.

Friedrich says they hope the Climate Parents effort will spurt the candidates to back clean energy. “We want candidates to just acknowledge that a clean energy future is the way to go and support every policy on the table now. And to propose how they are going to get us toward 100 percent clean energy,” Friedrich says. You can find out more at climateparents.org.