You are here: Home / Sports / Mangino out as offensive coordinator at Iowa State 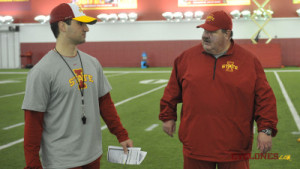 Joel Lanning will start at quarterback on Saturday when Iowa State hosts Texas but that was not the biggest item discussed at Paul Rhoads weekly news conference.

Mark Mangino is out as offensive coordinator and Rhoads says it is the result of an ongoing disagreement over the direction of the offense.

“Mark and I could not get on the same page on a few important items”, said Rhoads. “We tried to talk that through again this morning in an effort to get us moving in a different direction. In the end, Mark was not interested in that and I wish that was not the case.”

Mangino was seven games into his second season on the ISU staff. Passing game coordinator Todd Sturdy will take over the play calling duties.