State officials have established a new “Wrongful Conviction Division” in the Office of the State Public Defender.

“What’s an acceptable error rate for our criminal justice system?” State Public Defender Adam Gregg asked this morning. “Even if we get it right 99 percent of the time and only get it wrong one percent of the time, that would mean there are over 80 innocent people currently incarcerated in Iowa prisons. And at what cost? To the state, it’s about $34,000 per year per inmate. But what about to their families, to their lives and to their sanity? And at what cost to public safety?”

Gregg said when the wrong person is convicted, that means the real criminal isn’t held accountable. The first batch of cases to be reviewed by this new division date back to the 1980s and early ’90s. Gregg said about 100 convictions from that time period involve what is now considered the “junk science” of hair analysis. It was used before DNA testing was standard practice. Investigators will try to find the hair evidence in those cases and conduct DNA tests to determine if the DNA of the person convicted matches the crime scene evidence.

“These cases take a long time to screen, to investigate and ultimately to litigate,” Gregg said. “We expect it could be a couple of years before there is actually an exoneration as this goes through the legal process.” 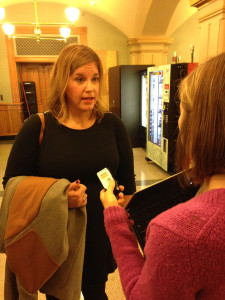 “We know that this has been a problem elsewhere and I think it would be presumptuous to say that it would not be a problem in Iowa,” McGinn told reporters this morning. “It’s just a matter of finding these cases and finding the appropriate legal means to prove their factual innocence if we have the ability to do so.”

Iowa law requires court officials to keep evidence in criminal cases for just three years, but officials rarely dispose of evidence in first degree murder convictions. Finding conclusive evidence in these cases will be the most difficult part, according to McGinn.

“We have no idea how this evidence was stored, if it’s available and if it would yield any DNA results if we did DNA testing now,” she said.

Governor Terry Branstad announced the creation of this new Wrongful Conviction Division this morning at his weekly news conference.

“In a system operated by humans, mistakes can be made,” Branstad said, “including wrongful convictions.”

So-called “Innocence Project” efforts nationwide have so far yielded 330 cases in which DNA evidence proves the person convicted didn’t commit the crime, but none of those cases have been in Iowa. If someone is found to be wrongfully convicted in Iowa, state law automatically makes them eligible for $50 for each day they were in prison.