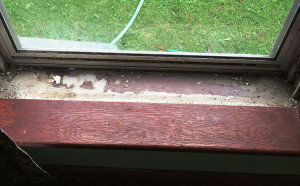 Most children are exposed to lead hazards when they play around windows where the paint is in need of repair.

Iowa has a higher percentage of old homes that were painted with lead-based paint when compared to other states. That puts children in Iowa at a much greater risk for lead poisoning and a variety of health problems.

There are programs around the state to help homeowners reduce lead hazards. Jennifer and Bryan Minney of Cedar Rapids learned their home, built in the 1950s, had lead paint.

Their own children and some foster children were put at risk. “Most kids, you know, they like to be out playing in the grass with their shoes off. They could get really sick just by having the paint chips touching their feet,” Jennifer said.

The Minney’s learned about a local “Hazard Hunters” grant program and had the lead paint removed from the exterior of their home. “They covered the whole cost and because the window wells had lead paint as well, they replaced our windows that were affected by lead paint too,” Jennifer said. The Linn County Hazard Hunters program is federally funded.

The Iowa Department of Public Health reports the prevalence of lead poisoning among children in Iowa under the age of six is 7 percent. That’s more than four times the national average.