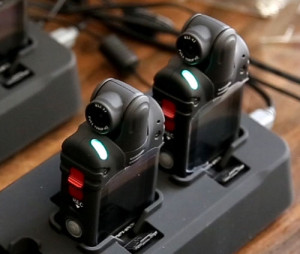 Dubuque is the only police department in the state to win a federal grant to buy body cameras and a comprehensive policy is now being developed detailing how to use the cameras and their recordings, which are considered public records.

One of the biggest challenges and expenses, Baxter says, is having officers store and catalog the recordings. “They’re provided with storage devices in which to keep the videos that have evidentiary value or may be of use later on,” Baxter says. “Even with our cameras mounted inside of our squad cars, those download onto a big server we have on site here at the police department.” The U.S. Justice Department grant of $61,000 should allow Dubuque to buy 120 body cameras. It would have taken much longer if the city had to pay for them.

Baxter says they’re a welcome asset, but he adds: “You can’t ever duplicate the officer’s personal experience, training and what he or she is seeing or feeling through a camera,” Baxter says. “I want to stress the fact these cameras are just one tool in a big tool box of law enforcement, if you will, of the profession.”

Steve Young, Assistant U.S. Attorney for the Northern District of Iowa, agrees with Baxter, saying body cameras and recordings have limitations, as we’re seeing in all sorts of controversial cases across the nation. “You don’t always know what happened before it that caused those issues,” Young says. “I see too often, people drawing conclusions without knowing all the information and that is something that is troubling.”

Iowa is one of 30 states considering new laws about body cameras, including whether they should be required. Currently, police departments and other agencies decide on a case-by-case basis what’s released to the public. Young says law enforcement agencies have to balance privacy rights with the public’s right to know, based on Iowa’s open records law. “You have to err on the side of openness, unless there is a legitimate exception to releasing it and those are individually determined and assessed,” Young says. “You’ve suggested some media will do that and if they don’t feel that the responding agency is being appropriate, there are legal actions you can take. You can take it to court and try to develop your case.”