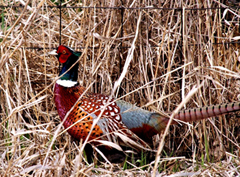 A lot of hunters are excited about the opening of Iowa’s pheasant season this Saturday (October 31).

Todd Bogenschutz with the Department of Natural Resources, credits an August roadside survey showing the state’s pheasant population has increased by 37-percent.

“Our pheasant numbers have bounced up to levels we haven’t seen in about eight years, so I think there’s a little bit of optimism for folks heading out into fields this fall,” Bogenschutz said. Around 50,000 hunters participated in Iowa’s pheasant hunting season last year — up from 40,000 the previous year.

“I’d be surprised if we don’t jump to 60,000 or more this year. It could be the most hunters we’ve seen in a number of years as well,” Bogenschutz said. A good number of pheasants can be found statewide, according to Bogenschutz, but there are areas with thicker populations.

“As far as best densities in the state, there’s kind of a band that goes from northwest Iowa, down through Fort Dodge, and then over toward Louisa County,” Bogenschutz said. Lower pheasant counts were recorded in southwest, south central and northeast Iowa. Iowa’s pheasant hunting season this year runs from October 31 to January 10.