You are here: Home / News / O’Malley, on recreational marijuana everywhere: ‘I’m not there yet’ 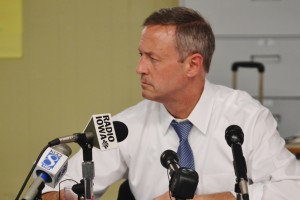 Democratic presidential candidate Martin O’Malley says it’s too soon to say whether it should be legal in the U.S. to sell, buy and use marijuana for recreational purposes.

“I’m not there yet. I could get there,” O’Malley says. “I don’t think we’ve had enough time with Colorado and Washington State.”

On Wednesday, another presidential candidate proposed taking marijuana off the federal list of illegal drugs and Bernie Sanders says that would let all states regulate marijuana as they do alcohol and tobacco. When O’Malley was governor of Maryland, he signed a law in 2013 that will let marijuana be prescribed as medicine, but officials are still struggling to write the rules for the program.

“I also decriminalized the possession of small amounts of marijuana,” O’Malley says.

O’Malley made his comments today during a meeting with The Des Moines Register’s editorial board. Hillary Clinton, the other candidate in the Democratic presidential race, has said policymakers should wait to see what happens in Colorado and Washington State before taking any action at the federal level.