You are here: Home / News / You can vote on new cover photo for Iowa Travel Guide 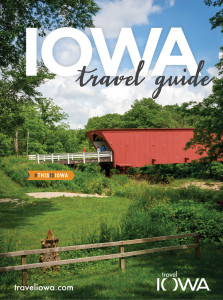 An online poll is underway to determine the image that will be used for the cover of next year’s Iowa Travel Guide. Iowa Tourism Office spokesperson Jessica O’Riley says voters can choose from four options.

“We’ve got a shot of a scenic overlook at Effigy Mounds National Monument near Harpers Ferry, the world famous Roseman Covered Bridge in Madison County, some bikers on the Wabash Nature Trail in southwest Iowa, and hikers in the Loess Hills,” O’Riley said.

The winning cover will be announced on November 4.

“People can vote now through Wednesday, November 4, at 10 a.m. through our Facebook page,” O’Riley said. The Iowa Tourism Office distributes more than 100,000 copies of the Iowa Travel Guide each year. It can be found at Iowa’s welcome centers or ordered online.

“In addition to hundreds of listings of museums, hotels, bed and breakfasts, campgrounds, cabins, and all of those sorts of things, we also include some special features,” O’Riley said. “For next year, we’re have a special feature on Grant Wood because it will be his 125th birthday. So, we’ll have a spread in there to say where you can find Grant Wood pieces, all the way from Cedar Rapids to, of course, the American Gothic House (in Eldon).”

The cover of this year’s Iowa Travel Guide features a photo from Dunnings Springs Park in Decorah. The next travel guide will be released in early 2016. 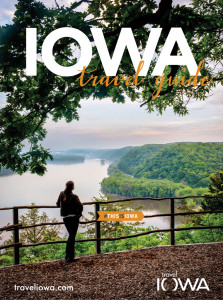 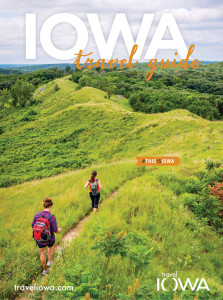 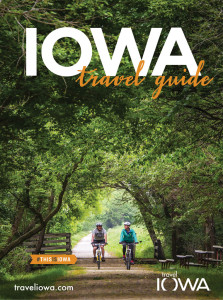