You are here: Home / Sports / Bragging rights and IIAC lead up for grabs in Dubuque 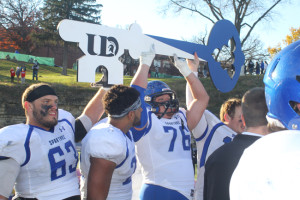 The Key to the City Trophy is given annually to winner of the game between Loras and the University of Dubuque.
photo courtesy/UD athletics

Bragging rights, the Key to the City Trophy and the lead in the Iowa Conference race is on the line Saturday when the University of Dubuque hosts Loras. At 4-0, Dubuque has sole possession of the conference lead while the 3-1 Duhawks can earn a share of the lead with a win.

Loras coach Steve Helminiak has turned the Duhawk program around in just his second season at the helm and much of the reason is the play of freshman quarterback Nolan Baumhover. The former Western Dubuque standout has passed for more than 18 hundred yards and 22 touchdowns.

“He stepped in and for a young guy has shown incredible poise”, said Helminiak. “I’m very proud of the job he has done so far and obviously this week it is a tall task and we hope he is up to the task.”

Dubuque coach Stan Zweifel says time of possession will be meaningless in this game and it will come down to the number of snaps each team gets.

The series dates back to 1900 and Loras will be out for its first victory over the Spartans since 2010.