You are here: Home / News / ‘Hay to be made’ with undecided voters at today’s Iowa GOP event featuring 10 candidates 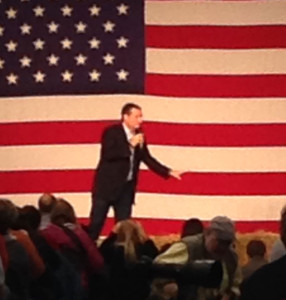 “I’m guessing 75 percent,” Kaufmann told Radio Iowa. “There is definitely hay to be made, to use an Iowa analogy, in this room.”

Dawn Smith of Durant, chair of the Cedar County Board of Supervisors, said the televised debates haven’t given her enough information about the candidates.

“There’s quite a few of them that I really like,” Smith said. “I worry about electability. There are some that, morally, I just really love, but I just don’t know if they have the strength for world politics right now.”

Ann Darby of Boone is looking for “wisdom and humility” in a candidate, but hasn’t made a final choice yet. Darby said being an undecided voter is common in her community of political activists.

“I think they’re in the same boat we are. They’re still looking,” Darby said. “We want to make intelligent, informed choices.”

Bob and Teresa Myers of Adel are undecided, too, and discussed their choices in the car as they drove to the event.

“We both, for a while, was definitely a Ben Carson fan and we still like him, but I just don’t know if he’s got the guts to slam his fists down when it’s necessary,” Teresa Myers said.

Bob Myers said it’s important to nominate a candidate who challenge Hillary Clinton on the debate stage next fall.

“Every one of them are pretty darned good candidates,” Myers said. “It’s a question of who can do the job.”

A few of the candidates focused on Wednesday’s CNBC debate. Ted Cruz said it was “fitting” the debate happened just before Halloween.

“The moderators were doing everything they could to ask every candidate: ‘All right, explain to me — are you more of a ghoul or a goblin?’ You know, how about we stop letting left-wing liberals moderate Republican debates?” Cruz asked the crowd this morning, drawing cheers.

Marco Rubio got high marks for his performance in the debate, but he didn’t mention the event during his 15 minutes on stage earlier this afternoon. Rubio instead used his stump speech to cast the 2016 election as a generational choice.

“We must turn the page both as a party and as a nation,” Rubio said, “and allow new leaders with new ideas that apply our principles of limited government and free enterprise, apply those principles to the unique challenges of the world before us.”

“There are a lot of talkers in politics this day. Man, trust me. I was on the debate stage. I see it. Some really good people that are good talkers,” Bush said. “I hope you want someone with a servant’s heart, that acts on principle, that does things rather than just talks about them.” 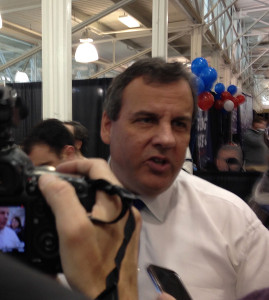 Chris Christie used his 15 minutes at the microphone to take a dozen questions from the crowd, then Christie turned the tables and ended by urging the crowd to ask themselves a question after next week’s GOP debate.

“Which of those 10 people do you want on the stage in September of 2016 prosecuting the case against Hillary Clinton…Who’s going to be strong enough to stand up to her?” Christie said the question should be, then delivered this answer: “I am ready to beat Hillary Clinton. I want your support to do it.”

Mike Huckabee called this past week’s debate a “train wreck.”

“CNBC, I want to give them credit,” Huckabee said. “They did something I wasn’t sure anybody could do. They actually brought all the Republican candidates together in a complete agreement that we won’t do any more debates on NBC if they’re going to run ’em like that.”

Carly Fiorina, Bobby Jindal, Rand Paul, Rick Santorum and Lindsey Graham also spoke at today’s event. It was staged inside the Varied Industries Building on the Iowa State Fairgrounds with activities for kids, barbecued pork for lunch and cold beer for adults. Just before three o’clock, the Iowa Republican Party’s chairman, announced from the stage that about 2000 people attended the event, which lasted more than five hours.