You are here: Home / News / Tips for making trick-or-treating safe 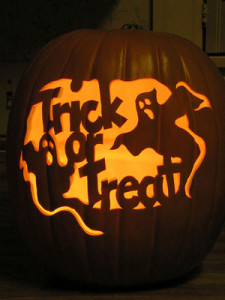 Many Iowans have fun at Halloween by creating scary haunted attractions in their front yards, often involving an prop cemetery, headstones and skeletons to frighten trick-or-treaters.

“With Halloween, there are always some added dangers we’re not necessarily used to and things that could spook a child to run into a street,” Dorland says. “Make sure you are paying attention to what may be overly frightening.” Dorland offers a few tips for those who will be staying at home, manning the candy dish and waiting for the doorbell to ring.

“Make sure the outdoor lights are on, sweep all the leaves from the sidewalks and the steps, clear the front porch of any obstacles the trick-or-treaters might get hung up on,” Dorland says. “Don’t forget to restrain your pets. Sometimes dogs may rush the door. That might scare some of the children and frighten them to run into the street.”

Parents need to take a few minutes to talk to their kids about safety before heading out the door to trick-or-treat. Dorland says it’s especially important for older children who won’t be accompanied by an adult.

“Plan the route with the children so they know it, they know the safe areas and the homes that should be visited,” she says. “They also know how to get back home so we don’t have any lost trick-or-treaters.” A few other tips: Make sure kids only trick-or-treat at homes where the porch light is on, and tell them to accept treats only at the door, never go inside. Take along a flashlight.

Only use battery-operated candles inside jack-o-lanterns instead of real candles where the flame could be a hazard. And if you’ll be on the road, take it slow as there will be plenty of pedestrians.