The Iowa State Cyclones gave no treats to visiting Texas, shutting out the Longhorns 24-0 on Halloween night.

It was the first win ever in Ames for the Cyclones against Texas, and came in a week when coach Paul Rhoads axed his offensive coordinator and named a red-shirt sophomore to the starting quarterback position.

Rhoads says the team didn’t listen to the negative things being said about them as they lost the last three games against three teams that had only lost one game between them. “We’ve been playing really good football teams, we’ve improved in the process,” Rhoads said. “We had one loss that was embarrassing to us, humiliating to us. Other than that, our football team has fought and prepared and done the things we have asked of them to do.” 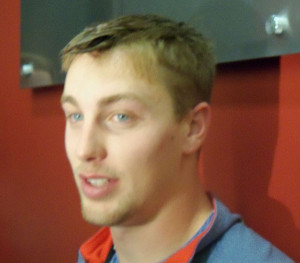 Joel Lanning of Ankeny ran for 64 yards and passed for 188 and one touchdown in his first start. Rhoads said Lanning’s performance was about what he expected.

“He is a competitive, competitive kid. He likes the ball in his hands. He stood in there under pressure, he delivered some clutch throw. He threw some bad balls, threw them into the ground, a number of them that he’d love to have back,” Rhoads said. “He’s tough, he ran for productive yardage– whether it was via a scramble or a designed quarterback run. He’s tough, he took some hits on some scrambles and got up and the team knew who was in charge.”

Lanning said it was good to see the team play well after all that happened this week. He said it was a stressful week for the whole offence, but they kept together and it was nice to get the win. He said he wasn’t nervous about starting his first college game.

“No, not really, I mean when I got out there it was just another game. I didn’t really feel any nerves, you’ve just got to realize that it’s just a football game,” Lanning said. 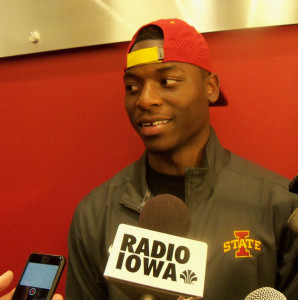 Cyclone running back Mike Warren had 157 yards on the ground and one touchdown. He said Lanning’s running ability help open things up for him.

He said Texas found out quickly that Lanning could run early on and that took a load off of him with the defense knowing the quarterback could run too.

Warren said getting the win against Texas is big. “It means we have to keep on rolling, we have to turn out these last couple of games and hope we make it to a bowl game,” Warren said. It was the fifth time Warren has run for 100 yards or more.

The Cyclones are now 3-5 overall and 2-3 in the Big 12. They go on the road to Oklahoma Saturday.