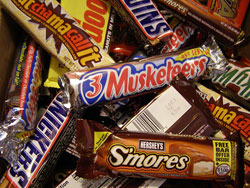 In the unlikely event your child collected more Halloween candy than he or she can eat, a dentist in southwest Iowa is willing to take the excess sweets off their hands to keep it out of their mouths.

Doctor Cary Jackson, at Broadway Family & Cosmetic Dentistry in Council Bluffs is behind the effort.

“We are accepting candy from trick-or-treaters,” Dr. Jackson says. “Each pound they bring in, they get a dollar.”

The dentist says the surplus chocolate bars, suckers and candy corn will be brightening the day for American troops who are stationed far from home.

“We’re participating in Operation Gratitude,” Jackson says. “That’s based in California. We’re one of the local branches. We’ll ship the candy to California and they’ll ship it overseas to the troops.” The candy will be accepted at the dentist’s office through November 13th.