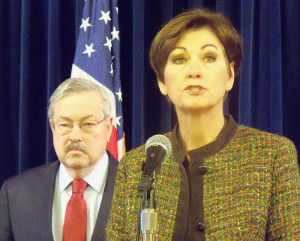 Reynolds says they will have a couple events set for that day — December 14th. “There will be a free open reception from 10 A.M. to 4 p.m. here at the captiol in the governor’s formal office upstairs. We are encouraging of course members of the public, as well as all interested school classes to line up your tours,” Reynolds says.

The second event is a dinner at the Iowa State Fairgrounds.”This is a bipartisan event that will feature a conversation with Governor Branstad looking back at his service to the state,” Reynolds says. “We have invited Face The Nation host John Dickerson to moderate the conversation, and we are very hopeful that he will be able to join us.” That event begins at 7 p.m. 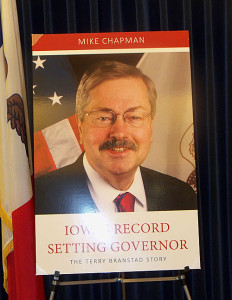 Those who buy tickets for the event honoring Governor Branstad will get a copy of his book.

Tickets to that event are $50 and include a copy of the governor’s biography. All proceeds from the event will go to the newly formed Governor Branstad Iowa History Fund.

December 14th will mark 7,640 days that Branstad has served as governor of the state. “Well, I never imagined that this would happen. I’ve got to pinch myself when I even talk about it,” Branstad says. “I guess I feel very humbled that the people of Iowa have chosen me, and that I have never lost an election and have been selected again and again to be the chief executive of this state.”

Branstad doesn’t plan to have any kind of library in his honor. He donated the gifts he received in office from the first 16 years to the Salisbury House in Des Moines, and much of the rest to the Mansion Museum in his hometown area of Forest City. “Most of the other items — including my political button collection, which is pretty extensive — and a lot of pictures and material, even including the scrap book on Iowa history that I did in eighth grade, is in that museum in Forest City,” Branstad says.

Discussion of the mementoes and history of his time as governor led to the question of where he would like his final resting place in Iowa to be. Branstad says his service in the Army helped him determine he wants to be buried at the Iowa Veterans Cemetery in Van Meter. “You know I am a veteran, I’m very proud to have served my country during a time when it wasn’t popular to serve — during the Vietnam era…and so that’s where I’d like to be buried,” according to Branstad.

Branstad credits his teachers early in life for his interest in politics. And he credited his wife Chris for being with him throughout his years in office.

“She doesn’t get the recognition that she deserves,” Branstad says. He says his wife enjoys entertaining, including the idea to dress the family as the Griswolds from Christmas Vacation for the recent Halloween event at the governor’s mansion. Branstad dressed as Clark Griswold and his wife was Ellen Griswold and one of his sons dressed as cousin Eddie.

For more information on tickets or the events surrounding Branstad’s record setting day, you can visit IowaHistoryFund.org or email [email protected]