You are here: Home / Human Interest / Founder of Gateway Computers to be remembered today 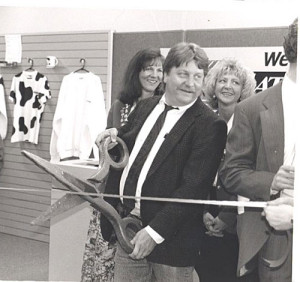 The funeral is today for one of the men who founded the Gateway Computer company in a western Iowa barn in 1985. Fifty-three-year-old Mike Hammond died last week at his home in Sioux City. Jim Wharton worked with Hammond and Gateway cofounder Ted Wait at their North Sioux City complex.

“Mike was the guy behind the scenes who was the tech guy who understood the nuts and bolts of computers like no one else,” Wharton says. “He really was I think, underappreciated in terms of what he did with that company. But the people who worked for Gateway knew very well the role that Mike Hammond played. He was one of the key people, one of the early guys in and he left an incredible mark on that industry.”

The company made built-to-order computers and eventually shipped them out in boxes with cow spots on them. Nicknamed the “Hammer,” Wharton and Wait attended the University of Iowa together before leaving school to start the company. Wharton says their story is very similar to the Dell computer story, as they thought they had a better idea to sell computers. Hammond was the builder and Wait the seller.

Hammond held various positions in the company, including senior vice president of manufacturing and vice president of the company’s Asia-Pacific operation. Hammond later went into business restoring cars at a North Sioux City firm known as Dakota Muscle. Gateway struggled to keep up with the rapidly changing computer business and was eventually sold in 2007.