You are here: Home / Agriculture / ICCI presents report on manure application to the DNR 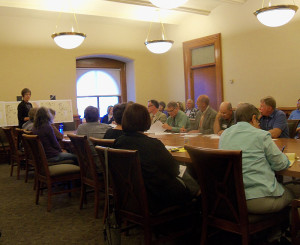 Members of ICCI and the DNR meet at the state capitol.

Members of the group Iowan Citizens for Community Improvement met with officials from the Department of Natural Resources today to present a report they say shows the state agency has failed to crack down on manure pollution from large-scale livestock organizations.

The group says it mapped 234 manure management plans in Adair, Boone, Dallas, Gutherie and Sac counties and found missing documents, double-dumping and the over-application of manure.

DNR director Chuck Gipp and other staff members addressed the concerns during the hour-long meeting at the state capitol. Gipp spoke with Radio Iowa after the meeting.

“Some of it is just misperceptions and things like that. When you call it double-dumping, double-dumping is not occurring unless somebody is not abiding by his manure management plan. That’s the issue we have,” Gipp says. “So, when somebody is found to have a water pollution incident, or when we go out there and look at construction permits and things like that, we check those.”

Gipp says it is not illegal for more than one producer to designate ground as the place they will apply manure. He says that doesn’t mean too much manure is being applied, because one person might put on half the allowed amount and the other person the other half, or one may not use that ground.

Gipp says the DNR checks up on producers and investigates complaints when they get them. “If they’re not using a certified manure hauler, if they’re not abiding by the manure management plan — they get fined by what we have the capacity to do,” Gipp says. The DNR staff pointed out that some of the missing documents cited by the group were because the operations aren’t large enough or the type where a manure management plan is required. 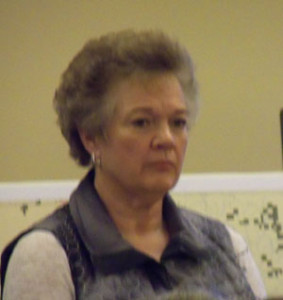 The ICCI members claimed the DNR isn’t following through on its charge to protect the waters of the state. Gipp says that’s not true. “Water quality is something that is very important to us, it certainly is important to Iowans, it certainly important to the Iowa Department of Natural Resources, and we regulate that based on our legal authority as best we can,” Gipp says.

Gipp says they will review the information presented by the group. “We’ll go back and we’ll look at it and we’ll provide answers to them,” Gipp says. “The things I do appreciate about today’s meeting…it was one of the first times there actually were some constructive things rather than ranting and raving and screaming.”

ICCI member Barb Kalbach lives on a farm in Adair County and presented some of the information in the meeting. “You know I think that we had a thorough study of those manure management plans. We were talking to the top people in DNR agencies, so we were getting a response from people that ought to know why the irregularities exist in the manure management plans and they were very willing to respond to us. And we will be following up with them in the next 30 days to see what actions can be taken,” Kalbach says.

Kalbach says she understands that more than one operation can designate ground for spreading manure, and also understands it would do producers no good to spread too much manure on a piece of ground. But, she says the number of plans that have dual land use listed raises concerns. “And so then the next question is ‘where is that manure going?’ And I would submit that that manure is being applied to another field, it has to be it has to be applied somewhere,” Kalbach says.

She says they understand there are some legislative limits on what the DNR can do, and they will take that up with the legislature. “We will be pursuing some of these things that are in the code that they say the can’t enforce, because that they are in the code they aren’t allowed to enforce,” Kalbach says. Kalbach says the number of waterways that are getting polluted with ag runoff is increasing as are the toxic algae outbreaks at beaches, and she also cites the need for more treatment of water for nitrates as reasons they are pushing to have tighter controls on where and how manure is spread in the state.

“We can’t continue that way if we expect to have clean water to drink, and clean water to bathe our kids in, let alone recreational avenues here in the state of Iowa,” Kalbach says. You can find out more about ICCI’s report on manure at the organization’s website.