You are here: Home / News / Senator Grassley believes vote on EPA water rules will be close 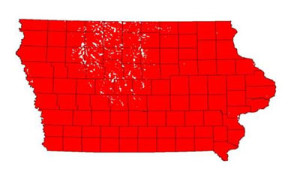 The U.S. Senate will consider legislation today designed to flush the controversial Waters of the United States rule and to send the Environmental Protection Agency back to the drawing board for a complete rewrite.

Iowa Senator Chuck Grassley says the rule would give the EPA jurisdiction over the management of all water and the land surrounding it.

“This is the biggest power grab of any bureaucracy that I can think of in my time in the Senate,” Grassley says, “controlling almost every inch of land in the state of Iowa and the Farm Bureau has out a map in their Farm Bureau Spokesman a couple of weeks ago that shows that.”

The bipartisan bill would establish guidelines the EPA and the U.S. Army Corps of Engineers would have to follow in collaboration with the states to ensure the regulations he says are “workable and constitutional.”

Grassley says, “We’ll be voting on attempts to address this flawed process used by EPA to draft the rule.” Grassley is cosponsoring a measure authored by Iowa’s other U.S. Senator, Joni Ernst. Her legislation is called a joint resolution of disapproval which would scrap the Waters of the U.S. rule without a filibuster.

Grassley says, “This type of oversight is necessary because instead of attempting to address the legitimate concerns raised during the open comment period, the EPA and its allies pushed their own agenda, attempting to drive support for the rule while belittling the concerns of the public.”

The rule proposes giving the EPA wide powers over ponds, streams, creeks and marshes on farms so it appears any time a landowner wants to control water on their property, they would have to first check with the federal government.

Grassley says today’s Senate vote will be close and “will show who is willing to end this power grab by the EPA.”