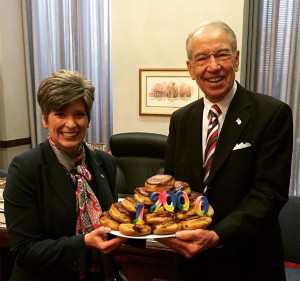 “There are only 17 other senators in history that have cast more votes than Chuck Grassley,” Ernst said on the Senate floor today. “On top of that, he has the longest existing voting streak in congress.”

“He is a workhorse and has dedicated his entire career to serving Iowans,” Ernst said.

Grassley was first elected to the Iowa legislature in 1958, when he was 26 years old. He was elected to the U.S. House of Representatives in 1974 and has been serving in the U.S. Senate since January of 1981. Three other senators — and two of them are Democrats — joined Ernst to mark Grassley’s voting milestone this morning on the senate floor.

Senator Patrick Leahy, a Democrat from Vermont, has served alongside Grassley for 35 years. “Senator Grassley has been a very special friend during that time,” Leahy said. “…Twelve-thousand votes, hundreds of hearings, countless numbers of Tweets, probably four dozen sweater vests later, he’s the same down-to-earth farmer who visits every one of the state’s 99 counties every year.”

Grassley spoke about the milestone and his annual 99-county tours.

“With these 12,000 votes, I think of the many conversations and pieces of correspondence behind each vote,” Grassley said.

Grassley admits he doesn’t have any hobbies.

“At least not in the way that people usually think of hobbies,” Grassley said. “My time spent with the people of Iowa is part of my work…That’s what I get paid to do, is to listen…My time with Iowans is my pleasure and my relaxation.”

“He’s just a few months out from becoming the longest-serving senator in Iowa history and yet he’s one of the most energetic guys around here, “McConnell said, “a runner in every sense of the term.”

Grassley, a regular runner who celebrated his 82nd birthday last month with a six-mile run, is running for a seventh senate term in 2016. Democrats Tom Fiegan, Rob Hogg and Bob Krause are currently seeking their party’s nomination to challenge Grassley’s bid for reelection.