You are here: Home / Agriculture / Iowa ranks 6th in the country for number of organic farms 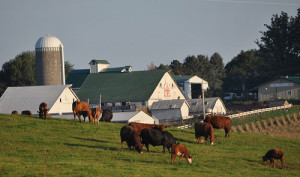 Farm Sweet Farm is a 700-acre, certified-organic farm near Harlan.

Iowa is one of the top producers of organic crops and livestock, according to data from the U.S. Department of Agriculture.

There were 612 organic farms in Iowa in 2014, when the U.S.D.A. conducted the recently released survey.

That places Iowa 6th among the 50 states. California, by far, has the most organic farms, followed by Wisconsin, New York, Washington, Pennsylvania and Iowa.

Growers of organic crops avoid using chemical fertilizers and pesticides, while organic livestock are raised without the use of antibiotics and feed on organic food. The U.S.D.A. reports Iowa had just under 68,000 acres of organic crops last year and organic sales in the state totaled $103 million.

Iowa produced more organic soybeans and corn for grain than any other state and ranked first among the states for it’s percentage of organic hogs and sales of organic goat milk.