You are here: Home / Human Interest / Pella woman honored for creating group that feeds the needy 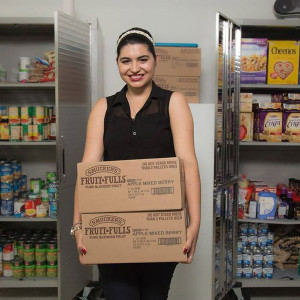 A young woman from south-central Iowa who heads a non-profit group that helps feed the needy is being named one of ten “Women of Worth” by an international cosmetics company.

Out of 6,000 nominees, Maria Belding of Pella was picked by L’Oreal as one of the ten honorees and Belding says she’s stunned to find herself in such impressive company.

“I can’t even describe how fantastic they are,” Belding says. “One of them is 84 and working in prisons to help reduce recidivism. They are just incredible human beings. All of us get $10,000 for our organization and one of us gets another $25,000 based on public voting.”

Belding is co-founder of the MEANS Database, which stands for Matching Excess And Need for Stability. The interactive website allows food pantries and soup kitchens to quickly coordinate exchanges of excess food items between each other and local donors – preventing food from ending up in landfills.

The free program is now being used by hundreds of food pantries in 21 states. Since February, she says it’s helped move and save four tons of food. Belding, a 20-year-old pre-med student at American University, was asked what set her and MEANS aside from the thousands of other nominees for the prize.

“We’re able to use technology in a way that it hasn’t been used before and we’re able to challenge the status quo of food waste,” Belding says. “Plus, I think people just like cheering for a team of young people. We’re almost all 20 or younger. It’s really cool to see a team of 10 or 11 college students that decide to spend their time doing this.” Belding conceptualized MEANS when she was in high school, volunteering in her church’s basement food pantry in Pella. They were given a year’s supply of macaroni and cheese but hundreds of expired boxes had to be tossed in the dumpster, while hungry people were turned away in the dead of an Iowa winter.

There are some 60,000 food pantries and soup kitchens nationwide, but Belding says more than $2.5-billion in food is thrown out every year. She says MEANS will get a tremendous boost from the $10,000 prize, adding, to win the additional $25,000 dollar grand prize would be astounding.

“From now until the 20th, you can vote every day,” Belding says. “The best way to find that is to type in ‘L’Oreal Women of Worth’ into your favorite search engine and it should pop up pretty quickly. Then, on December 1st, there’s a gala in New York City with Julianne Moore and Diane Keaton and all of the L’Oreal spokeswoman so I’m really, really excited for that, too.” Belding is the youngest of the ten honorees.

Link to vote for Maria: www.lorealparisusa.com/en/women-of-worth/2015-honoree.aspx?profile=Maria-Rose-Belding