You are here: Home / Crime / Courts / Two dead in Sioux City after crash of stolen car 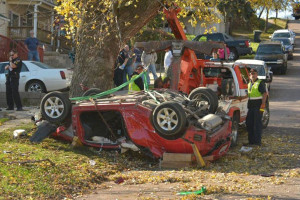 Sioux City police are investigating the deaths of two people in the crash of a stolen car. Two Sioux City residents, a 34-year-old man and a 28-year-old woman died in the crash. Their names have not been released.

Police say the car was reported stolen last Thursday. It was traveling at a high rate of speed down the street when it went airborne where a hill begins a steep descent.

The car landed and then sped into a Durango that was backing out of a driveway. The car veered into a tree — overturned onto its roof — and slid into a parked Jeep Cherokee.

The man and woman in the car were pulled free, but died from their injuries. The occupants in the Durango were not injured.