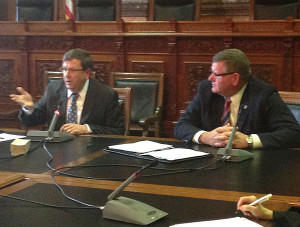 A deputy sheriff who’s a state senator and the out-going speaker of the Iowa House are teaming up to find ways to make Iowa’s laws on human trafficking tougher. House Speaker Kraig Paulsen of Hiawatha said unfortunately too few Iowans know it’s a problem.

“Probably to most Iowans, this is a hidden crime,” Paulsen said today, “and it needs to not be because it’s obviously having a significant impact.”

Paulsen said it may be time to designate an office in state government to compile the data to show how prevalent the problem is. Senator Kevin Kinney set up a sting in a small town that rescued three young women when he was an investigator in the Johnson County Sheriff’s office.

“In 2005 when I had the first human trafficking case in the state of Iowa, I couldn’t anybody to listen to me. I think it’s wonderful that we have a roomful of people here today that at least get what’s going on,” Kinney said today. “We just have to expand this and train other law enforcement.” K

inney and Paulsen hosted a panel discussion on the issue today at the statehouse. Captain Curt Henderson of the Iowa Highway Patrol is involved in training troopers and others to recognize the signs of human trafficking.

“These are kids from our own communities and you hear their testimony and you look at their faces and you recognize this is a big problem,” Henderson said during the hearing. “And I’ll be the first to admit that law enforcement hasn’t been on board.”

Henderson said it’s important to not only go after the person trafficking young women and girls for sex, but to properly penalize the person who’s paying for it.

“This isn’t just a law enforcement problem. It really is a society problem,” Henderson said. “However, I have come to believe that law enforcement must take the lead in moving forward in our state on this issue.”

Iowa State University sociology professor Teresa Downing-Matibag is a volunteer with the Network Against Human Trafficking. She recommended a law that would force those arrested for paying for sex to notify their spouse or partner, so they can be tested for sexually transmitted diseases.

“I believe that we are at a tipping point in Iowa and our nation,” Downing-Matibag said, “wherein if we do not address this crime there will be no turning back.”

She said Islamic terrorists have been using prostitution to finance their operations in the Middle East and highly-organized crime syndicates are established in other countries where parents sell their own children into the sex trade. Iowa Public Safety Commissioner Roxanne Ryan said it’s important for state officials to ensure victims of human trafficking can be protected once they’re rescued.

“What we’re finding is that when we do training for everybody in the system, law enforcement and others, that there are signs that are pretty obvious that human trafficking is going on, but if you’re not familiar with what the signs are, you may not recognize it as a human trafficking case,” Ryan said.

Ryan is using the already existing Law Enforcement Intelligence Network to collect information about human trafficking. Some advocates recommend law changes to make it easier to prosecute those who use on-line forums to offer and solicit sex. Experts say $150 billion will be spent this year in the international sex trade.