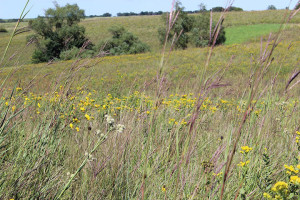 Reconstructed prairie on the Speiker Farm that’s now part of the Whiterock Conservancy.

The Whiterock Conservancy near Coon Rapids in west-central Iowa is making plans for 1,200 acres of land left to the organization by the Garst family.

Mary Garst, the wife of hybrid seedcorn pioneer Roswell Garst, left the land to the conservancy following her death in 2014. Whiterock executive director, Conrad Kramer, says there are four sections of land involved.

“Two of them are adjacent to each other and one parcel is actually adjacent to the existing Whiterock landscape, and another one is remote. So, only one of the four parcels is connected to our existing landscape here,” Kramer says. He says the lands have a variety of uses. “Between wetlands and natural lands like prairie and forests, and productive land including hay land and CRP,” Kramer says.

The Whiterock Conservancy is taking control of the land with an estimated value of $7 million. “We certainly will continue to manage it for production, but we would also like to make plans for restoration — prairie restoration and savanah restoration — on these parcels that are really prime candidates for some of that work. And also for opening them to the public, because all of them are quite special,” Kramer says. “Whiterock is already the third largest recreation area in the state, and we put a high priority on opening our lands for public recreation.”

Kramer says the donation adds a lot to the duties of the conservancy and says they will probably have to hire another fulltime person to the staff to oversee the new property. He says the non-profit conservancy depends on public support to run and they hope Iowans will help out.

Kramer says you can help out by using the facilities and paying camping and other fees. “But we also need Iowans to sit up and realize that this is a great asset for the state, but we don’t get any state tax dollars, unlike a state park. And if they want access to these great lands in the future, we need them to become donors,” Kramer says. He says they plan to have a formal public dedication for the new land sometime this spring.

To find out more about the Whiterock Conservancy, go to the organization’s website.