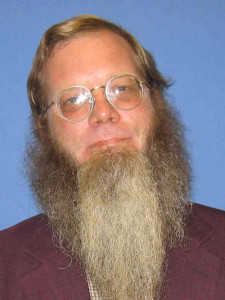 Mark Heistad had grown his beard for more than 40 years.

A Morningside College professor who hasn’t seen his chin for more than 40 years had his beard shaved off by his students Thursday.

Mass communications teacher Mark Heistad was recently diagnosed with esophageal cancer. His doctors are requiring him to remove the beard before continuing with his radiation and chemotherapy treatments and that’s when the students decided to help.

“My oncologist told me it was probably going to start falling out in chunks. I wasn’t looking forward to that at all,” Heistad says, “and so my students organized this at my suggestion. But they put it together.” Heistad, who has taught at Morningside since 2002, became emotional talking about the support he has received since being diagnosed with cancer. 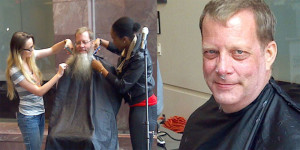 The beard trimming process and the post trim picture.

“You wouldn’t believe the support,” Heistad choked up and then continued, “the support I’ve gotten from family, from colleagues, from students, has been overwhelming.” He then apologized for getting emotional, saying he told himself he wouldn’t do that.

He began growing his beard after graduating from high school as a competition with his brother. After students trimmed much of the beard away, Joe Peters of Crown Barbers finished shaving the professor. Heistad looked in the mirror at a chin he hasn’t seen for over four decades.

“Very, very strange, I’m gonna have to decide if I am going to wear a name tag,” Heistad said in reaction to his beardless face. He joked that students may think he’s a substitute in seeing him without the beard.

“It’s going to be interesting to see people’s reaction, so I’ll be sending out lots of photos on Facebook,” according to Heistad. 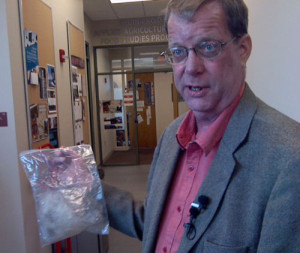 Heistad with some of the remains of his beard.

Heistad said he knows he will have a sense of loss at losing the beard, but may grow it back after his surgery and treatments are complete.

“In January they will be replacing my esophagus with part of my stomach. That will be a six-hour surgery with a month to six weeks recovery time,” Heistad said. “But I have every hope that sometime in January somebody is going to declare me healthy and cancer free.”

Heistad saved the shaved remnants of his beard and says his students are looking at using it in a charity fundraiser. He will finish teaching this semester at Morningside and have his surgery after the first of the year.