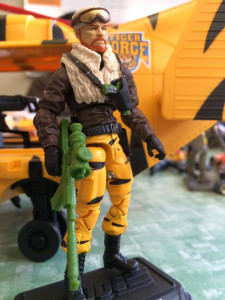 Hundreds of collectors of G.I. Joe action figures from across the country will converge on central Iowa this weekend for a convention focused on the plastic soldier with more than five decades of history in boys’ toy boxes.

This weekend’s trade show and convention will feature a host of vendors, one of the original Hasbro toy painters, and a team of what Sauer describes as G.I. Joe archaeologists who have meticulously traced the toy’s 51-year lineage. Sauer says, “They go through and contact the original artists, sculptors, producers, executives and collect and gather all of the archived materials of what went into making the G.I. Joe toy line.” While Sauer started off staging battles with his three-and-three-quarter-inch tall figures as a kid in the 1980s, he later discovered his dad’s collection of the original 12-inch-tall G.I. Joes.

The fascination continued to grow, along with his collection, which is now battalion-sized. Sauer says he’s not phased when someone questions why a grown man is still playing with his childhood toys.

“With the comic book movies being so widely popular, ‘geek culture’ has moved out of the shadows and the damp basements and into the mainstream,” Sauer says. “I feel a little bit funny sometimes in professional settings talking about it but no, I keep a bit of my collection on display in my office.”