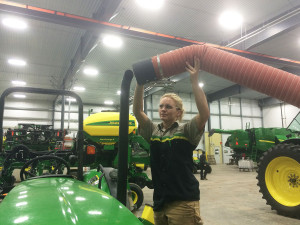 A northwest Iowa woman was recognized with a National Proficiency Award at the recent National FFA Convention in Louisville, Kentucky in a field that doesn’t have a lot of women.

Kellie Einck from Primghar received the award in the Agricultural Mechanics and Repair and Maintenance category for her work at the local John Deere dealership.

Einck is a student at South O’Brien High School and says the award honors students for their supervised agricultural experience, and is one of the highest honors given.

“The proficiency award measures your skills and growth and passion in your award area,” Einck explains. “It’s not so much who makes the most money — it does count the money made and hours worked in your application — but the award is more based on growth and development in an ag field.”

Einck says didn’t grow up on a farm, but always enjoyed diesel trucks, and working on those trucks. She completed a diesel mechanics course through Northwest Iowa Community College and says FFA allowed her to follow her passion into a career when an opening became available at John Deere farm equipment deal ICON Ag and Turf in Paullina. “Found out I love tractors and the ag world. I feel like it is a strong part of our community, so it is an important role keeping the farmers going,” Einck says. Einck has been working as a farm equipment mechanic for a year-and-a-half. 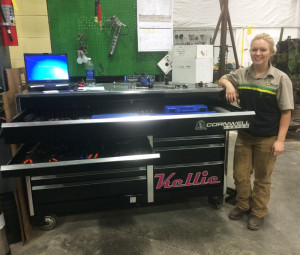 Einck found she has a passion for working on agriculture equipment.

She says on occasion she will get some strange looks from farmers when they first realize it is a young woman working on their tractor, combine, or other farm equipment.

“Some are wowed and they think that’s just the coolest thing ever. And others are more used to the traditional men going out to work on their equipment, so they come in and they are a little more skeptical ‘oh, I don’t know if I want a girl working on my equipment.’ So, you kind of take it with a grain of salt,” Einck says. “I am kind of like the museum piece in here. Everyone kind of walks in and looks at me a little funny and then they carry on with their day. It’s just something that they are going to have to get used to.”

Women make up more than 45 percent of the total national F-F-A membership. Just to give you an idea of how young women have made a difference in the agricultural organization, of the six selected national officer positions, this year’s national officer team consists of five women, including the new National F-F-A president.