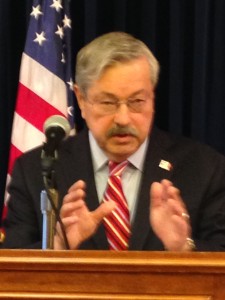 “We started working on this in January, so we’re looking at almost a whole year,” Branstad told reporters this morning. “I know there are people that want to protect their funding stream and are afraid of change, but the truth is this has proven to be effective in other states.”

Branstad said taking the management of Medicaid patient cases away from government workers and shifting it to employees at private companies is saving money in other states and “improving patient outcomes.” Some health care providers are complaining they only recently got notice of the proposed rates for care of Medicaid patients in Iowa. Democrats in the legislature are calling for a delay in a key deadline. Health care providers must agree to the new rates by January 1st — or face a 10 percent reduction in payments from the state for care provided to Medicaid patients in the future.

The governor said this latest round of criticism reminds him of what was said about his Medicaid expansion plan in 2013.

“The providers were up in arms. ‘It was terrible. We’re afraid of this.’ And you know what? Today we have more people insured than we’ve ever had insured,” Branstad said. “The providers are making more money than they ever had. Charity care at hospitals has gone down significantly, so the hospitals that strongly objected to that have really seen that it worked effectively.”

Three Democrats serving in the state senate say the people who “actually do the work” of caring for the more than half a million Medicaid patients in Iowa have asked for help to slow down the governor’s fast track toward managed care.

Branstad made his comments toward the end of his weekly news conference. Find the audio at the bottom of this story.