You are here: Home / Agriculture / DNR orders shooting of elk in Monona County 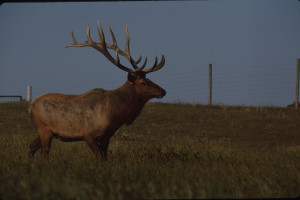 An elk that was wandering around west-central Iowa was shot and killed Sunday by a Monona County Sheriff’s deputy, as directed by the Department of Natural Resources.

The DNR’s Mick Klemesrud says the first sighting of the animal came about a month ago and it was determined the 3-to-4 year old bull elk did not belong to anyone in the area.

“We compared pictures from the elk (spotted) in Monona County to the ones in Ida and Sac Counties and it was determined to be the same animal,” Klemesrud said. “On Sunday morning, a farmer combining his field saw it and made a call to our officer, who worked with the Monona County Sheriff’s office to shoot the animal.”

Around a dozen elk are shot by the DNR each year, but only if officials can’t find the proper owner of the animal. “The reason we do that is because we don’t want any diseases, like Chronic Wasting Disease, to impact our domestic livestock or our whitetail deer population,” Klemesrud said.

The brain stem and lymph nodes of the bull elk were removed for testing of CWD or other diseases. Klemesud is reminding hunters and others that removal of a wandering elk is the responsibility of the Iowa DNR.