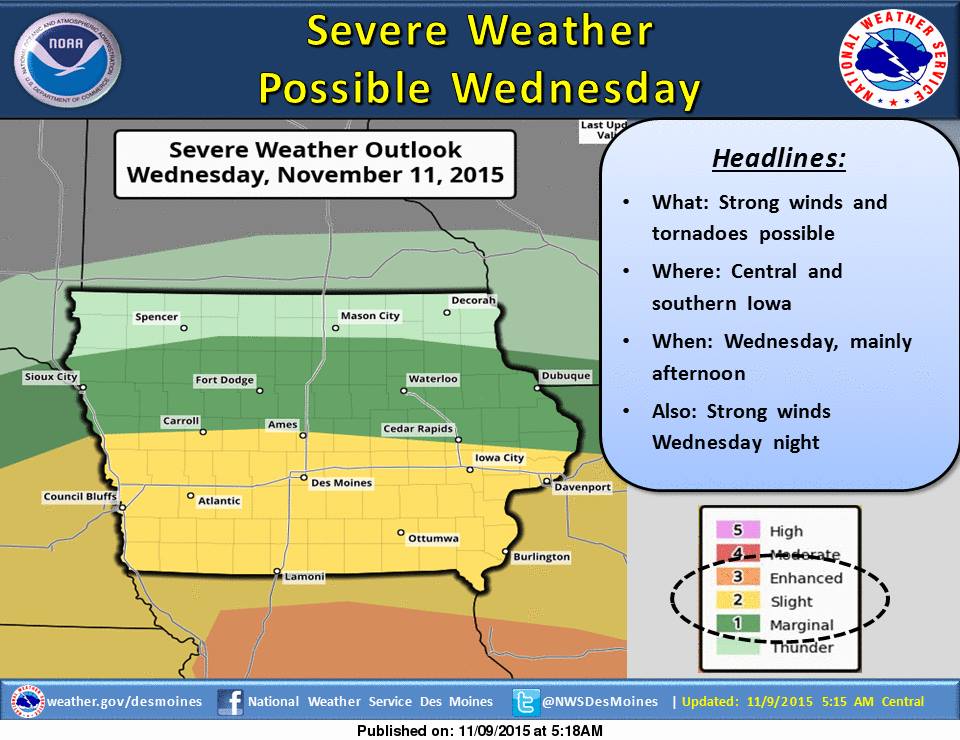 There likely will -not- be snow, but forecasters say a large portion of Iowa could see severe weather roll into the state late Tuesday and into Wednesday.

Roger Vachalek, a meteorologist at the National Weather Service, says it’s relatively rare but not unheard-of for a storm of this magnitude to strike during November. Vachalek says folks living across Iowa’s southern half should be on guard.

“There is a risk for severe weather in Iowa and especially for states to our south,” Vachalek says. “We have a slight risk all the way up to around Highway 30 and we may see storms that include hail or the possiblity of high winds and maybe some tornadoes.”

Most of Iowa had very unseasonably warm weather last week, with highs in the 70s that were some 20 degrees warmer than normal. Vachalek says milder weather will be sticking around and should prevent any snowflakes from flying in this storm.

“There isn’t quite enough cold air coming in behind it to change the rain on the back side over to snow but we’ll be watching that,” Vachalek says. “There may be a brief change-over somewhere in far northwestern Iowa or maybe even in southern Minnesota, but for the most part, this will not be the snow event that some folks are looking for. We may have to wait a few weeks for that.”

It’s a good idea, he says, for Iowans to be prepared for a storm like this.

“Folks should keep up with the forecast over the next few days and monitor the outlook that we mentioned for Wednesday and monitor the latest forecast and, of course, any watches and warnings that are issued,” Vachalek says. “We’re still a couple of days away from it so things could change, but it does look like a fairly significant event coming.”