You are here: Home / Military / History made as two women enlist in Iowa Guard artillery unit 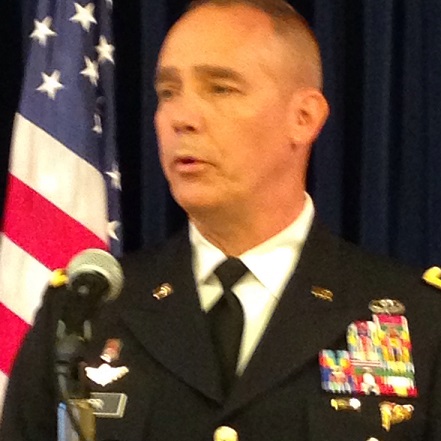 The leader of the Iowa Army and Air National Guard says “the sky’s the limit” for female soldiers now that women are allowed to serve in combat roles in the military. Tomorrow, Iowa National Guard Adjutant General Timothy Orr will sign onto the “EPIC Challenge” — promising to recruit and promote women into the guard.

“Love to be able to see that double in the next few years, but it’s a tremendous opportunity,” Orr says, “especially with the 100 percent tuition assistance that our men and women both in the Air and Army receive as being a member of the Iowa National Guard.”

In January of 2013 the Army and Air Force lifted restrictions which forbid women from serving in combat-specific, previously male-only roles. Last month the Army opened field artillery jobs to women.

“I’m proud to say that last week we…had our first two female young privates that enlisted into an artillery unit in northwest Iowa — which is the first time in the history of the Iowa National Guard,” Orr says.

Three women just completed the U.S. Army’s Ranger school and Orr, who is a graduate of the program, says that’s “a great testament” to the Army’s effort to bring women into combat roles. The Iowa National Guard, however, is not launching a campaign targeting women as potential recruits.

But Orr says he “absolutely” sees growth potential in signing up female recruits. Orr is in command of both the Army and Air National Guard in Iowa and his top deputies in both branches in Iowa are women. It means when Orr retires, those women are likely in a position to be considered for the top job of adjutant general of the Iowa National Guard.

Orr made his comments this morning during Governor Terry Branstad’s weekly news conference.