You are here: Home / Fires/Accidents/Disasters / One person dead in Charles City fire 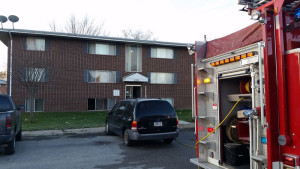 A fire at this Charles City apartment left one person dead.

One person was killed in an apartment fire early this morning in Charles City.

The Charles City Fire Department responded to a report of smoke and fire alarms sounding in an apartment complex at 4:19 this morning.

Firefighters arrived on the scene at 4:22 where they encountered smoke along with a fire in one of the apartments.

Entry was made and the fire was extinguished quickly. A person was found in the apartment and transported to the Floyd County Medical Center where the person was pronounced dead. The name of the victim has not yet been released.

Firefighters say no foul play is suspected but the investigation continues.