You are here: Home / News / High Wind Warning in place for parts of the state 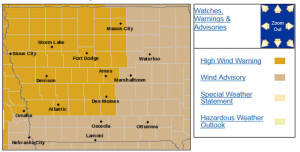 Iowans who still have leaves to rake may soon find they’ve all blown away, as a wide section of the state will be under a High Wind Warning tonight and into tomorrow.

Meteorologist Jeff Zogg, at the National Weather Service, says it’ll get more blustery as the day goes on.

“We have a very strong storm system that will be lifting northeast into Iowa later today and moving further northeast tonight and the winds will really increase around the back side of this system,” Zogg says, “with surface winds speeds sustained as high as 40 miles per hour, possibly gusting up to 60 miles per hour.” Iowans need to take precautions, he says, as the winds could be severe.

“With strong winds like we’re expecting tonight, people need to secure outdoor objects, things that may blow around easily, trash cans, lawn furniture,” Zogg says. “Also if you’re traveling, high-profile vehicles are especially at risk, just from the surface area they present to the wind. With that strong wind, it can cause issues if you’re driving those kind of vehicles.”

Those winds are just one key element of a massive storm system that’s stretching across much of the central U.S., likely bringing thunderstorms to Iowa this afternoon. “The greatest threat of severe weather later today will be from southwest into southeast and up to central Iowa, the greatest threat being primarily south of Highway 30,” Zogg says. “The primary threat will be strong winds, however, if we get enough sunshine to destabilize, we may see a couple of tornadoes with some of the stronger storms.”

If there’s a silver lining to the cloudy forecast, it’s that snow is unlikely for Iowa. “There is the possibility, as the system lifts out tonight, we may see a brief change over to snow or a rain-snow mix across northwest and north-central Iowa,” Zogg says. “However, by the time it cools off enough, the precipitation will be lifting out, so we don’t expect any kind of accumulation from the snowfall.”

Parts of Kansas, Nebraska and Colorado are under a Blizzard Warning, with several inches of snow expected along with severe winds, likely bringing white-out conditions.