You are here: Home / Military / Home Base Iowa exec heading out on recruiting trips to military bases 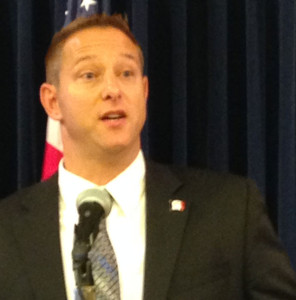 The executive director of the state’s “Home Base Iowa” initiative is planning to attend job fairs on nearly a dozen military bases over the next few months to encourage retiring soldiers to move to Iowa.

“Home Base Iowa exists to help make sure…that transitioning service members come to Iowa and have the best chance to find employment, to find good, safe communities and to get the education benefits that they and their families are looking for,” Kemp says.

Kemp is a retired Air Force master sergeant and he’s been executive director of the Home Base Iowa program for six weeks.

“As a veteran myself, I understand what the transition is like for our military members,” Kemp says. “In 2012, I retired here and had a little problem so this job myself, so this job is very near and dear to my heart.”

Kemp sees “regional” recruitment as a priority, as he seeks to sell Iowa as a new home where retiring vets can get a break on college tuition, get help buying a first home and get help from Home Base Iowa is finding a job.

The U.S. Army is cutting its ranks by 40,000 soldiers over the next two years, part of a downsizing of all branches of the U.S. military. The Home Base Iowa initiative began in 2014. So far 900 Iowa businesses have signed a pledge, promising to hire veterans and 16 colleges and universities in Iowa have been declared “champs” for providing tuition breaks and other services on campus to veterans. The schools also offer deferred payment options, so college bills come due when the soldiers receive education assistance grants from the military.

According to the U.S. Census Bureau, nearly nine percent of adult Iowans are veterans.