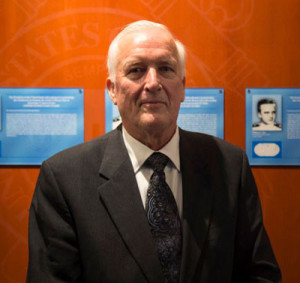 An eastern Iowa man who served in the Coast Guard during the Vietnam War is being honored with a plaque on the Coast Guard’s Wall of Gallantry in the Hall of Heroes at the academy in Connecticut.

Seventy-two-year-old William Carr, of Davenport, received the Bronze Star for heroism in 1968. Since then, he’s only told his son about his actions during the war and never even told his wife, but Carr agreed to talk to the academy’s cadets.

“I don’t consider myself a hero,” Carr says. “I was simply a young officer who did my duty during very extraordinary circumstances and sooner or later, it only took 48 years, but some people thought that was what they call heroism. There’s servicemen and women that do this all the time.” 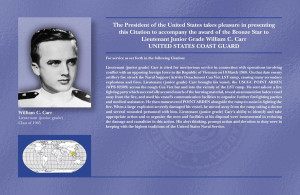 During the war, Carr responded to an enemy attack and the resulting fires at a Naval supply base in Vietnam.

He commanded a patrol boat crew that led the effort to fight the fires, save ammunition and other materials from being destroyed, and helped provide medical help for the wounded.

During his address last week, Carr reminded the cadets he was just 24 years old at the time.  “At the very beginning of my presentation, I asked all those cadets who were 20 years or older to stand up because I wanted them to relate directly,” Carr says. “In four years or less, all of those young men and women would be the same age I was at that incident in Vietnam, so it’s right around the corner for them.”

Carr graduated from the Coast Guard Academy in New London, Connecticut, in 1965 and commanded two Point class cutters in Vietnam in 1967 and ’68.

The Bronze Star citation reads: “Lieutenant Carr’s ability to identify and take appropriate action and to organize the men and facilities at his disposal were instrumental in reducing the damage and causalities in this action. His alert thinking, prompt action, and devotion to duty were in keeping with the highest traditions of the United States Naval Service.”