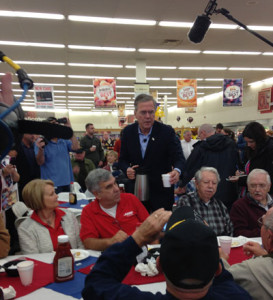 Bush is campaigning in Iowa today. At about nine o’clock this morning, Bush arrived at Hy-Vee in Johnston where veterans were being treated to a free breakfast. Bush poured coffee and shook hands for about an hour before talking briefly with reporters about last night’s candidate debate in Milwaukee.

“How do you improve on last night’s performance?” Bush was asked as he walked to the waiting campaign van.

Bush replied: “I’ll do better. I thought it was fine. I did well. I talked about issues that are important to people. We need to start thinking about, ‘Who’s the person who can beat Hillary Clinton?’ rather than trying to get into small differences between each campaign. The big different is Hillary Clinton will double-down on a failed economic policy and I have the leadership skills to fix these complex things to allow people to rise up again. That’s what I’m going to focus on.”

As Bush climbed into the van, a reporter asked for the secret to his improved debate performance and Bush quipped: “Smiling more.”

Then Bush rolled down the van’s window to reply to a question about playing bocce ball in Wisconsin before the debate.

“One bowl and I won. Couldn’t drink the beer with the guy, though. I had to leave. It was in the middle of a hotel lobby,” Bush said.

A reporter noted there was a ping pong table in the hotel lobby as well. “Yeah, I don’t get it. Milwaukee rolls differently than we do in Miami,” Bush said.

Former Kansas Senator Bob Dole won Iowa’s Caucuses in 1988, while Bush’s father who was vice president at the time finished third. Dole also won the Iowa Caucuses in 1996, the year that Dole won the GOP’s presidential nomination. Dole issued a statement this morning, saying he considers “nearly all the Republican candidates to be my friends, but I have determined that Jeb Bush is the most qualified.” Dole, who is a World War II veteran, pledged to “do all I can to be helpful to Jeb’s campaign.”