You are here: Home / News / Iowa’s governor in Knoxville to survey tornado damage 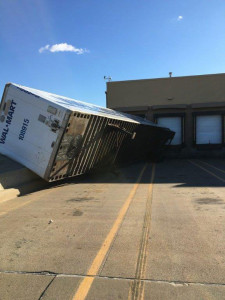 Truck trailer damaged by the storm.

“I just want to say first and foremost we’re pleased there are no serious injuries,” Branstad said.

Branstad told reporters he was seeing “significant” damage in a residential part of Knoxville. His first stop was at the Walmart in Knoxville where the building’s roof caved in.

“We’re hopeful that most of this is going to be covered by insurance,” Branstad said.

Cell phones using towers across the county line got storm alerts before the tornado hit, but there was no Natonal Weather Service tornado warning in effect for Marion County at the time and warning sirens were not activated in Knoxville. Branstad said after an incident like this, warning procedures should be reviewed.

“We have a lot more technology, but unfortunately in this case at Walmart or here, the homeowners didn’t get a warning that there was a tornado,” Branstad said.

Mark Schouten, the state’s emergency management director, is aware of complaints that the sirens didn’t sound in Knoxville.

“In part, it’s the result of a very fast-traveling storm that really out-paced the speed of the National Weather Service to issue those warnings,” Schouten said.

Branstad praised Knoxville residents for how quickly the clean-up is advancing. The National Weather Service has confirmed an EF1 tornado hit Knoxville Wednesday afternoon, with wind speeds reaching as high as 110 miles an hour.