You are here: Home / Fires/Accidents/Disasters / Police officer and firefighter from Nevada honored for valor 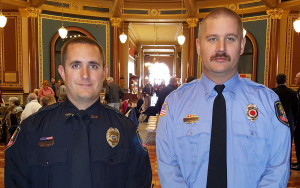 A volunteer firefighter and a police officer from Nevada were honored Thursday at the statehouse for their actions during an apartment building fire back in February.

The firefighter, Bradley Melton, arrived on the scene shortly after police officer Chris Brandes, who was leaving the building after becoming overcome by smoke. Melton was told a man was stuck in one of the apartments.

“I ran in and met officer Brandes, who was at the door and told me where he saw (the apartment resident) last. I went in and grabbed him and pulled him out,” Melton said. Brandes said the man inside the apartment where the fire started would not have survived if Melton had not arrived when he did. “I don’t think so, not with the amount of heat and fire…and after the fire was extinguished, the amount of damage inside…I don’t think he would have (survived),” Brandes said.

The man who was rescued was hospitalized was placed in a medically-induced coma because he had burns to his airway. He was released from the hospital three weeks later. Melton said he didn’t think much about how he was putting his own life at risk upon entering the burning apartment. “I just put feelings aside because I knew there was somebody in there who needed help,” Melton said.

Melton and Brandes were among five peace officers and firefighters presented Thursday with the Sullivan Brothers’ Award of Valor.