You are here: Home / Fires/Accidents/Disasters / Wednesday’s storms raise questions about timing of warnings 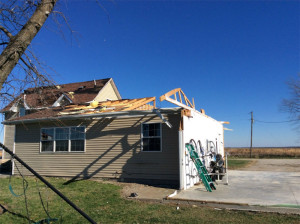 Part of the roof was torn off this home Wednesday near Lake Rathbun.

After touring tornado damage in Knoxville, Governor Branstad is calling for a full review of warning procedures as no sirens sounded in advance and no tornado warning was issued for Marion County.

Ken Harding, meteorologist in charge of the National Weather Service office in Johnston, says the Knoxville twister was one of at least seven that touched down statewide on Wednesday afternoon and he expects the number to rise.

“Actually, the great majority of the tornadoes did have warnings,” Harding says. “The one that went through Knoxville initially did not have a tornado warning. We had a severe thunderstorm warning issued and we’d indicated a tornado was possible in this warning, but the scientific confidence of actually producing a tornado was not there when the storm did produce.” 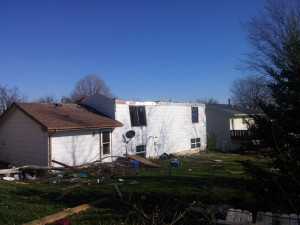 Forecasters put out a statement on Monday — two days before the storm — warning that severe weather was likely on Wednesday.

As many as 20 tornado warnings were issued during the afternoon as the extremely large, powerful storm swept over the region. “We had actually 11 people on duty during the event on Wednesday, our normal duty would be three,” Harding says. “The storms were moving between 50 and 65 miles-an-hour and it is a challenge to stay in front of those.”

Some areas of Iowa reported wind gusts of 80 miles-an-hour and damage is widespread across the southern half of the state, with reports from the Missouri River all the way to the Mississippi. While seven tornadoes are confirmed to have struck the state, Harding says teams are still out doing assessments to determine if there were more. He says there may have been several more tornadoes, a very rare outbreak for November. 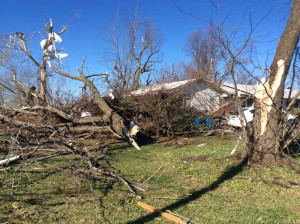 “Most of the tornadoes that we did forecast correctly did have a lead time,” Harding says. “Certainly, you’re not going to get 20 minutes lead time on these tornadoes simply because they form in a matter of minutes and they only last a minute or two. For example, the tornado that hit Knoxville was on the ground for four minutes — and it went four miles.”

After surveying a roofless Walmart in Knoxville, Mark Schouten, the state’s emergency management director, said he was aware of complaints that the sirens didn’t sound in Knoxville.

Schouten said: “In part, it’s the result of a very fast-traveling storm that really out-paced the speed of the National Weather Service to issue those warnings.”

Harding says his team members are dedicated to forecasting accurately and quickly and they’re well aware lives may be at stake. “It’s definitely a challenge, these storms are not easy, but we’re not making any excuses,” Harding says. “We are looking at our processes, our training, the events of the day. We will learn from this. Our goal is to certainly give people lead time and that’s not always possible. Science is not there. We have just not understood completely what causes all tornadoes, but we are certainly improving and we do take this very seriously.” 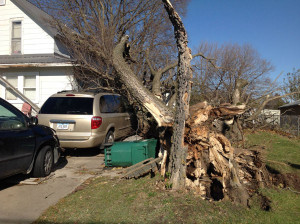 Harding says he has not been contacted by Governor Branstad’s office about this storm. He says it’s standard procedure to conduct an internal review after an event of this magnitude. The seven tornadoes that are confirmed so far were in or near: Avoca, Barnes City, Des Moines, Knoxville, Le Claire, Plano and Yale. Several other areas of the state had significant damage, including Dubuque, where an elementary school lost its roof.

As many as 12 more sites statewide are being assessed for damage as possible tornado strikes.